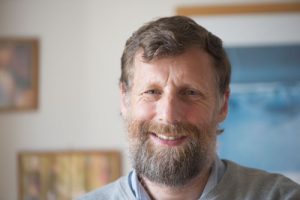 Scottish author, academic and activist Alastair McIntosh and I are leading the retreat Pilgrimage Week on the isle of Iona from 19 – 25 September 2016.

Alastair and I are interested in the healing power of the land and its communities. The retreat’s focus is on exploring the journey of life, its stages and spiritualities.

Alastair was brought up in Leurbost on the Isle of Lewis and is involved with Scottish land reform. He campaigned successfully against the Harris superquarry in Lingerbay and is a fellow of the Centre for Human Ecology. Alastair helped to set up the Govan-based GalGael Trust, which he is still actively involved with.

Alastair’s newly published book Poacher’s Pilgrimage  is about his 12-day pilgrimage through the islands of the Outer Hebrides, home to some of the most remote and spectacular scenery in the world. They host an astonishing range of mysterious structures: stone circles, beehive dwellings, holy wells and ’temples’ from the Celtic era that resonate to this day.

The retreat takes place on stunning Iona (Scottish Gaelic: Ì Chaluim Chille), a small island in the Inner Hebrides off the Ross of Mull on the western coast of Scotland. It was a centre of Gaelic monasticism for four centuries and is known for its tranquility and natural beauty.

For more information on the retreat please email Alastair or visit the Iona Community website.