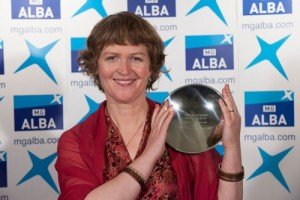 Mairi is absolutely delighted to announce that she has won Instrumentalist of the Year at the MG ALBA Scots Trad Music Awards 2015 on Friday 5th December in Caird Hall in Dundee.

Mairi was up against the brilliant musicians Ali Hutton, Ross Couper, Tom Orr and Tomas Callister.

“Totally delighted to have won Instrumentalist of the Year,” said Mairi. “What a great night of music and craic. Thank you to all who voted and thanks too to Simon and team for all that organising. Amazing contributions, both rooted, traditional and innovative. Scotland’s music has big heart and a strong Pulse!”

Today’s article in the Scotsman has a wee bit more info about it all – many congrats all!

CLUB OF THE YEAR Orkney Accordion and Fiddle Club

COMPOSER OF THE YEAR Ross Ainslie

INSTRUMENTALIST OF THE YEAR Mairi Campbell

LIVE ACT OF THE YEAR Rura

UP-AND-COMING ARTIST OF THE YEAR League of Highland Gentlemen

VENUE OF THE YEAR SEALL at Sabhal Mor Ostaig